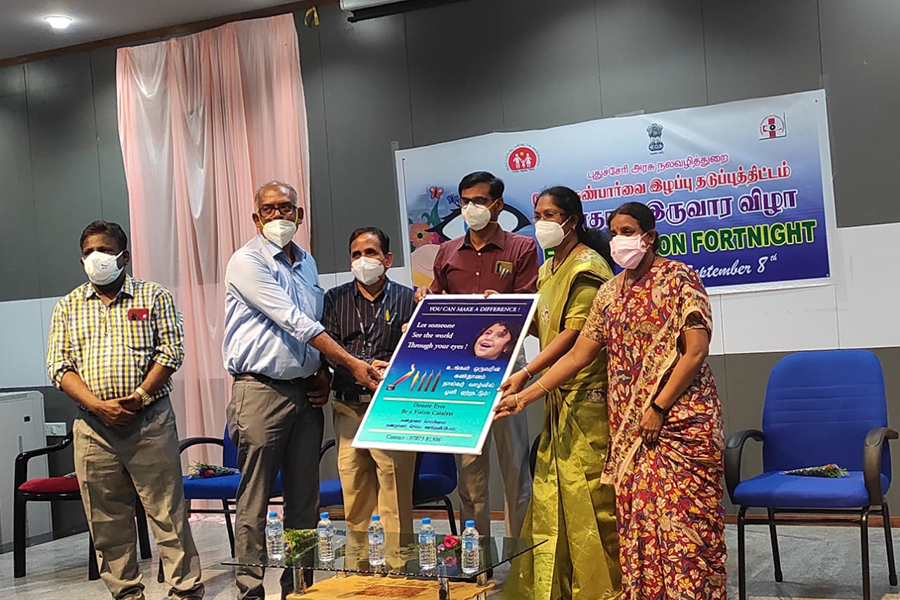 As part of observing National Eye Donation Fortnight, a pledge corner for people to pledge their eyes was set up in the outpatient waiting area.

Awareness talk on eye donation was given by Dr Josephine Christy, Cornea Consultant  to nearly 150 undergraduate students of IGMCRI. The function was presided over by the Dean, Medical superintendent and NPCB programme officer.

Dr. Rajesh spoke on eye banking nd the functions of eye banks at the Eye Donation awareness CME organised for the NGOs including Lions and Rotary clubs by JIPMER, Karaikal.

A talk on Eye donation surgical aspects was given to nearly 100 undergraduate students of Arupadai Veedu Medical College Hospital by Dr Josephine Christy.

Awareness talk was given by Dr Rajesh in Suryan FM.

A talk on Corneal transplantation and recent advances was given by Dr Josephine Christy to the residents and postgraduate students of Mahatma Gandhi Medical College, Pondicherry.

As an innovative way of creating awareness on eye donation among the general public, a pledge corner and photo booth were created in the Providence Mall, Pondicherry, in association with Rotary Club. On the concluding day, a flash mob was performed by the students of IMA-MSN Pondicherry and lucky draw prizes were distributed for people who had pledged for eye donation.

As a way to reach more general public, awareness videos with messages from celebrities were prepared and circulated in social media.

During the entire fortnight period, the caller tune of the hospital phone were short messages on eye donation aimed to create awareness to people.