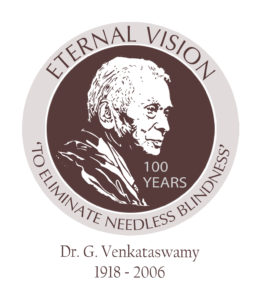 G. Venkataswamy popularly known as ‘Dr V.’ was the founder and former chairman of Aravind Eye Hospitals. He was born on October 1, 1918 in Vadamalapuram, a village eighty kilometres from Madurai in Tamil Nadu, India.

He received his medical degree from Stanley Medical College, Chennai in 1944. Thereafter, he joined the Indian Army Medical Corps but had to retire in 1948 after developing rheumatoid arthritis. The condition became so severe that he was bedridden for over a year. For a time, he struggled even to walk and could not hold a pen in his badly crippled fingers. Despite his condition, he returned to medical school and earned his diploma and master’s degree in Ophthalmology. Through his hard work and determination, Dr. V learned how to hold a scalpel and perform cataract surgery. Eventually, he was able to perform more than one hundred surgeries a day and over one hundred thousand successful eye surgeries during his lifetime.

While in the government service, Dr. V introduced a number of innovative programmes to deal with the problem of blindness in India. To name a few, outreach camps in eye care (1960), a rehabilitation centre for the blind (1966), and the creation of an ophthalmic assistants training programme in 1973. In recognition of his work in the fight against blindness, Dr, V received the Padmashree award in 1973 by the Government of India.

Upon his retirement from government service, Dr. V founded Aravind Eye Hospital as an 11-bed facility in 1976. He passed away on July 7, 2006. 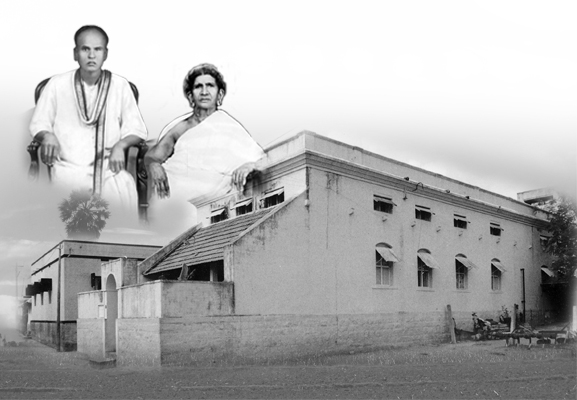 Dr. G. Venkataswamy was born in 1918 in Vadamalapuram, a small village in southern India as the eldest of five siblings. His father, Govindappa Naicker and mother, Lakshmi were well-respected individuals in the village. They were hard-working, simple and deeply principled. 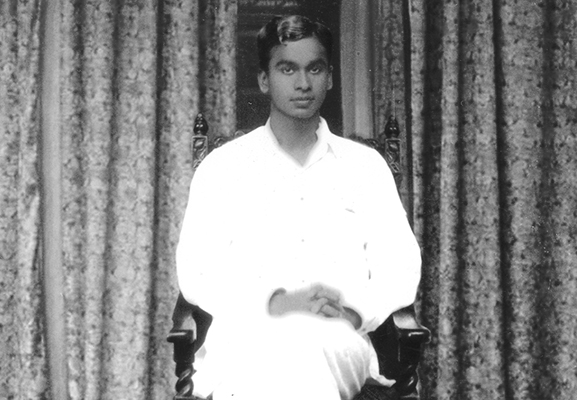 When he was around five, he witnessed the deaths of several of his cousins – young women who lost their lives to complications in pregnancy. There were no doctors in the village. The futility of these early tragedies disturbed the young boy so much that he began to dream about becoming a doctor to make a difference. 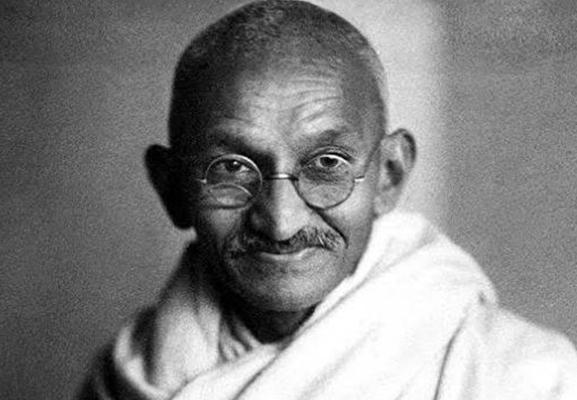 In the 1930s, India was in the throes of its struggle for independence. The voice of a man who proposed fighting the British with truth and non-violence had swept across India. Dr. V was greatly ignited and inspired by Gandhiji’s vision and example. 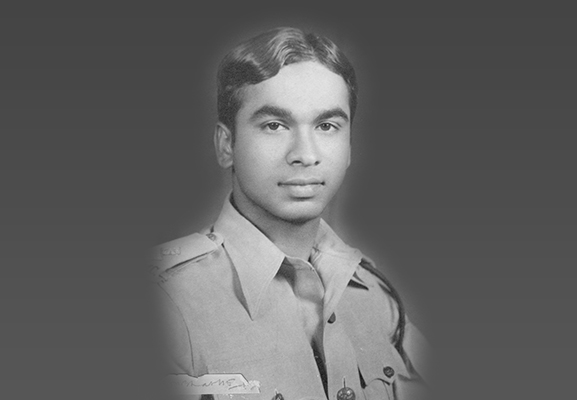 In 1944, Dr V served the army as a medical officer. In 1948, he was discharged after developing rheumatoid arthritis. He was bed-ridden for over a year, and his fingers became permanently crippled, bringing an end to his dream of becoming an obstetrician. 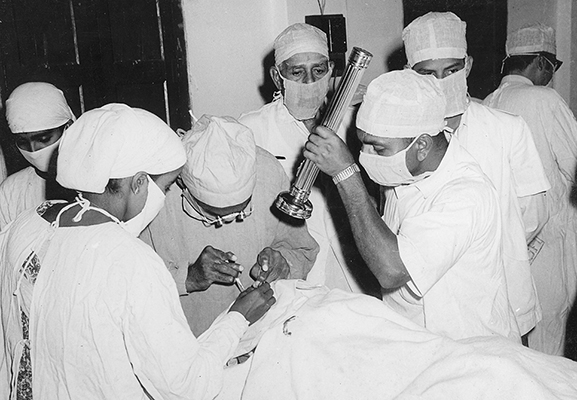 Dr. V moved on though his recovery was very slow. Eventually, he returned to medical school and joined the eye department. With determination and will, Dr. V persevered through his illness and trained his gnarled fingers to hold a scalpel and cut the eye for cataract operations. He personally performed over one hundred thousand successful eye surgeries. 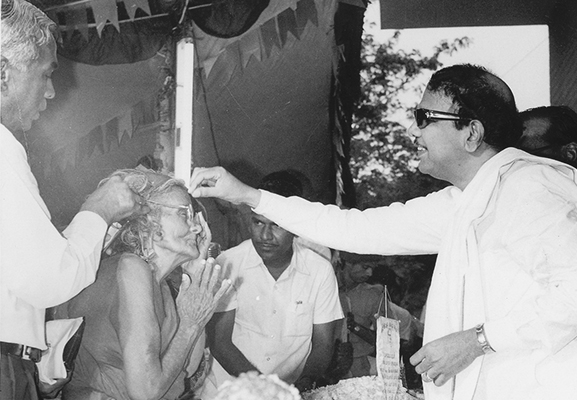 In the early 1960s, the Govt. of Tamil Nadu became increasingly interested in eye care services for the villages, and the concept of mobile eye camps was born. Dr. V, who was then the Head of the Department of Ophthalmology at Madurai Medical College took on the responsibility of heading this new initiative. 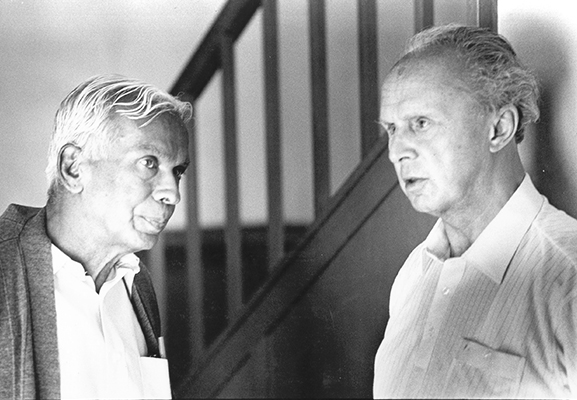 Dr. V met Sir John Wilson, who had founded the Royal Commonwealth Society for the Blind (RCSB) at a conference in the US in 1965. Sir John played a great role in building Dr.V’s confidence and strengthening his capacities. With his support, Dr. V started India’s first residential nutrition rehabilitation centre in Madurai. Dr. V along with Sir John Wilson and a few friends met with then Prime Minister, Indira Gandhi and persuaded her to launch India’s National Programme for Control of Blindness, the first nation-wide programme for blindness prevention in the world. 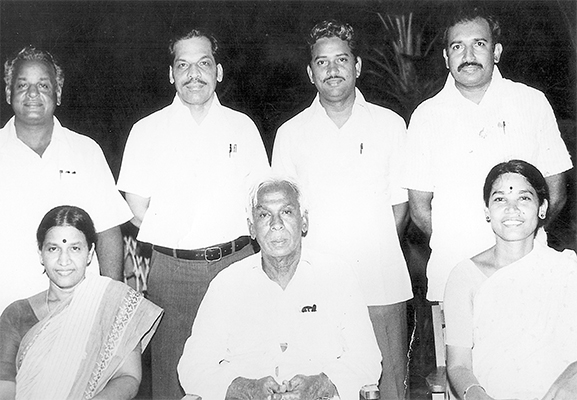 In 1976, Dr.V retired from government service at the age of 58. He began a non-profit trust, under which he founded the Aravind Eye Hospital at Madurai with just 11 beds. To build the hospital, he mortgaged his house and his siblings pooled their life savings. Dr. V’s own siblings and their spouses formed the founding team of Aravind. The Aravind Eye Hospital is named after Sri Aurobindo, one of 20th century’s most powerful spiritual leaders. Sri Aurobindo’s progressive teachings had profound influence on Dr. V’s life and vision. 2018 marked the birth centenary year of Dr. V. It was a time when Aravind reminisced on the deeper purpose underlying its establishment. Several events were conducted to commemorate the milestone, the culmination of which was a grand function organised on September 30, 2018 at Raja Muthiah Mandram, Madurai. Eminent personalities from different walks of life shared their thoughts about Dr. V and how his life has been inspiring to many. Of the various events held to honour Dr. V, the most significant one with a great and wide impact was the internet search giant Google’s special doodle on his birth centenary, October 1, 2018. A Tribute to the Light, a theatrical presentation on Dr. V’s life and ‘Infinite Vision’ a dance drama by Chitra Krishnamurti and team from the USA vividly portrayed the defining moments of Dr. V’s life.

A THEATRICAL PRESENTATION OF DR.V’S LIFE

A unique theatrical representation of Dr. V’s life. The performance received a standing ovation during Dr. V’s centenary celebrations. It had a profound impact on the audience and the team was invited to perform in various fora. Another highlight being that all the actors are Aravind’s  staff and their children from various centres. 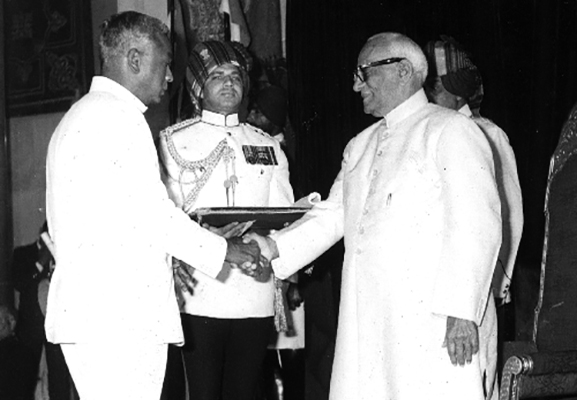 Padma Shri by Government of India on 1973 Honarary Doctor of Science Degree by the University of Illinois, Chicago on 1985 Medal of the Presidency of the Italian Republic by the Pio Manzu International Research Centre at Rimini, Italy on 2002 Hall of Fame Award by American Society of Cataract and Refractive Surgery, USA on 2004 Honorary Fellowship by the Royal College of Ophthalmologists, UK on 2004

Dr. Venkataswamy was the recipient of many awards, among them: the Padmashree Award from the Government of India, the Helen Keller International Award, and the first International Blindness Prevention Award of the American Academy of Ophthalmology.  He was a Founder and Advisor to the Seva Foundation. His vision lives on through the daily works of literally hundreds of eye hospitals around the world which he influenced through training, encouragement, and friendship.

Play – A Tribute to the Light : a play enacted by the staff of Aravind Eye Care System in commemoration of his birth centenary- 2018

Dance Drama – Infinite Vision : A dance drama by Dr. Chitra Krishnamurti and team in commemoration of his birth centenary- 2018